Judas Priest-"World Tour 1984"-11" X 12"18 pages-Concert and Souvenir Tour Program.Judas Priest was one of the most influential heavy metal bands of the '70s, spearheading the New Wave of British Heavy Metal late in the decade. Decked out in leather and chains, the band fused the gothic doom of Black Sabbath with the riffs and speed of Led Zeppelin, as well as adding a vicious two-lead guitar attack; in doing so, they set the pace for much popular heavy metal from 1975 until 1985, as well as laying the groundwork for the speed and death metal of the '80s. Formed in Birmingham, England, in 1970, the group's core members were guitarist K.K. Downing and bassist Ian Hill.The concert program has been autographed on the front cover by Rob Halford,Glenn Tipton and K.K.Downing...................BOTH CONCERT PROGRAM AND AUTOGRAPHS ARE IN VERY GOOD CONDITION. 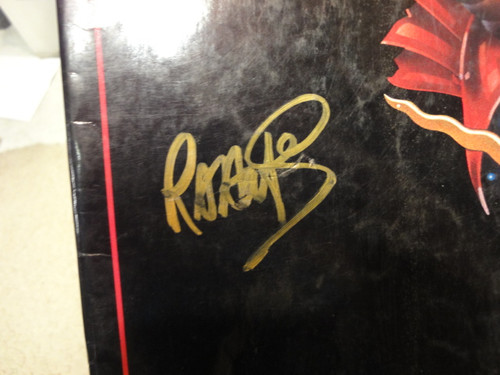