This item is a 10" X 13",black and white lithograph photo of actress Julianne Moore.A fine-featured redhead, Julianne Moore studied at Boston University and appeared off Broadway in New York before spending three seasons on the daytime drama As the World Turns, for which she won an Emmy in 1988. During the '90s she was one of the hardest working women in the movies, if not the most recognized by audiences. Small but noticeable roles in The Hand That Rocks the Cradle (1992) and The Fugitive (1993, as the hospital doctor who rips a phony nametag off Harrison Ford) propelled Moore to leading roles in Safe (1995), Nine Months (1995, with Hugh Grant) and Jurassic Park: The Lost World (1997, with Jeff Goldblum). She received Oscar nominations for her work in Boogie Nights (1997, starring Mark Wahlberg) and The End of the Affair (1999), and by 2000 Moore was on the A-list, beating out other stars for the lead role in Hannibal (2001, with Anthony Hopkins). In 2002 she won Oscar nominations for both The Hours (with Meryl Streep) and the marriage melodrama Far From Heaven (with Dennis Quaid). Her later films include the biopic The Prizewinner of Defiance, Ohio (2005) and the end-of-the-world drama Children of Men (2006, with Clive Owen).The lithograph photo has been autographed on the front by Julianne Moore................BOTH PHOTO AND AUTOGRAPH ARE IN VERY GOOD CONDITION. 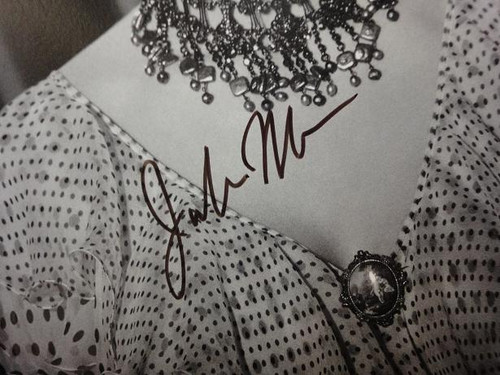