Music From-"The Pied Piper Of Hamelin"(RCA LPM 1563)-LP. This vintage LP features the 1957 Movie-"The Pied Piper Of Hamelin" starring Van Johnson.The Pied Piper of Hamelin was originally filmed as a television special, then released theatrically outside the United States. The story is the familiar one: the town of Hamelin, plagued by rats, hires a mysterious piper (Van Johnson) to rid the town of rodents. The piper does so, on the promise that he'll be paid a handsome fee. But the duplicitous burgomeister (Claude Rains), on the advice of his Laurel-and-Hardy council (Doodles Weaver and Stanley Adams), reneges on his promise. In revenge, the piper lures all of Hamelin's children off to parts unknown. In a departure from the original, there's a happy ending this time. Most of the dialogue is spoken in rhyme (quite amusingly by Rains), while the songs are adaptations of Edvard Grieg tunes. In the musical department, Kay Starr comes off best as the grieving mother of one of the missing kids. Because it was filmed in color, The Pied Piper of Hamelin has remained in TV syndication into the 1990s.The LP has been autographed on the front cover by Van Johnson...CONDITION OF VINYL,COVER AND AUTOGRAPH IS VG............. 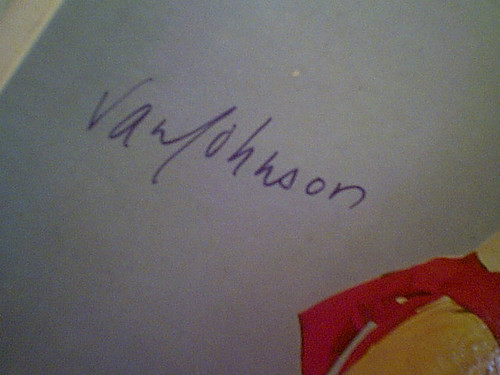