This item is an 8" X 10",black and white photo of Van Johnson in a scene from the 1952 Movie-"Plymouth Adventure".Plymouth Adventure earned a footnote in film history as the last directorial effort by the prolific Clarence Brown. Otherwise, this colorful re-creation of the Pilgrims' journey to America is a workmanlike job, never inspired but always interesting. Spencer Tracy stars as bull-stubborn Captain Christopher Jones, who intends to guide the Mayflower to its destination come Hell, high water or any other obstacle. Since Jones is spiritually "wed" to his job, the film's romantic angle is handled by Van Johnson as John Alden and Dawn Addams as Patricia Mullen. Gene Tierney is second-billed as Dorothy Bradford, the ill-fated bride of future Plymouth Colony governor William Bradford. Though the film makes several departures from the facts (there's even a villain!), Plymouth Adventure tells its tale professionally and with satisfactory entertainment value. The film earned MGM artisan A. Arnold Gillespie an Academy Award for best special effects.The photo has been autographed on the front by Van Johnson....BOTH PHOTO AND AUTOGRAPH ARE IN EXCELLENT CONDITION................... 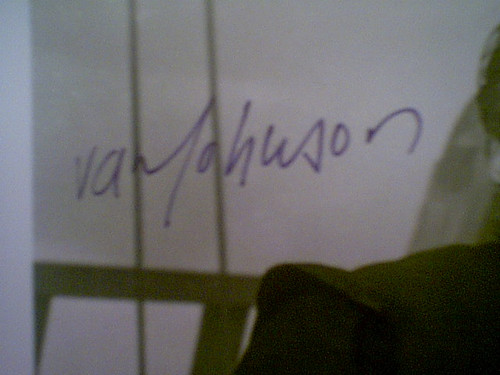