This item is a 7 1/2" X 10",black and white photo of actor Van Johnson. The photo has a biography of Van Johnson on the back and mentions his "latest" movie-the 1946 MGM Movie-"The Ziegfeld Follies".Proving himself an able actor in the Warner Bros. "B" picture Murder in the Big House (1942), Johnson was signed by MGM, where he was given the traditional big buildup. He served his MGM apprenticeship as Lew Ayres' replacement in the "Dr. Kildare" series, latterly known as the "Dr. Gillespie" series, in deference to top-billed Lionel Barrymore. While en route to a preview showing of an MGM film, Johnson was seriously injured in an auto accident. This proved to be a blessing in disguise to his career: the accident prevented his being drafted into the army, thus he had the young leading-man field virtually to himself at MGM during the war years. Delivering solid dramatic performances in such major productions as The Human Comedy (1943) A Guy Named Joe (1943) and Thirty Seconds Over Tokyo (1944), Johnson rapidly became a favorite with the public--particularly the teenaged female public. He remained a favorite into the 1950s, alternating serious characterizations with lightweight romantic fare. One of his best roles was Lt. Maryk in The Caine Mutiny (1954), for which he was loaned to Columbia. The photo has been autographed on the front by Van Johnson in black fountain pen..............BOTH PHOTO AND AUTOGRAPH ARE IN EXCELLENT CONDITION................ 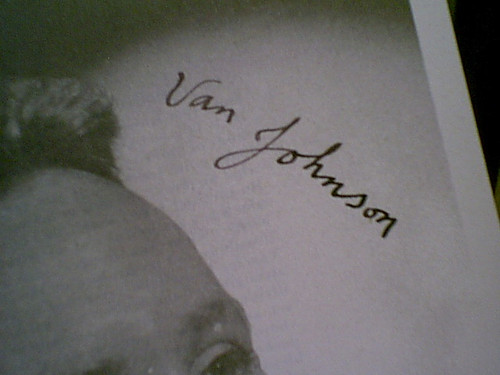