Spike Jones & The Band That Plays For Fun(Verve MGV 2021)-"Let's Sing A Song Of Christmas"-LP. This vintage LP was released in 1956 and books for $%0.00 in Mint condition. Spike Jones plays all your Christmas favorites on this one from Santa Claus Is Comin to Town to White Christmas.Lindley Armstrong Jones was a musical genius. In the wild and woolly days before MTV, digital tape and multi-track recording, Spike Jones put together a top-flight musical organization that the world has not seen the likes of since. Known as the City Slickers, the emphasis was on comedy, primarily doing dead-on satires of popular songs on the hit parade and taking the air out of pompous classical selections as well. Not merely content to do cornball renderings of standard material or trite novelty tunes for comedic effect, Jones' musical vision encompassed utilizing whistles, bells, gargling, broken glass, and gunshots perfectly timed and wedded to the most musical and unmusical of source points. His stage show was no less mind boggling, needing a full railroad car just to carry the props alone, all presented without electronic gimmickry of any kind, with visuals that would make your eyes pop out of your head. Though he often downplayed his musical achievements (all part of the master plan of selling the idea to the general public), the fact remains that Spike was a strict bandleader and taskmaker, making sure his musicians were precision tight, adept in a variety of musical styles from dixieland to classical, with a caliber of musicianship several notches higher than most big bands of the day who played so-called 'straight' music. The LP has been autographed on the front cover by Spike Jones with a fountain pen in black.............CONDITION OF VINYL,COVER AND AUTOGRAPH IS VG.................. 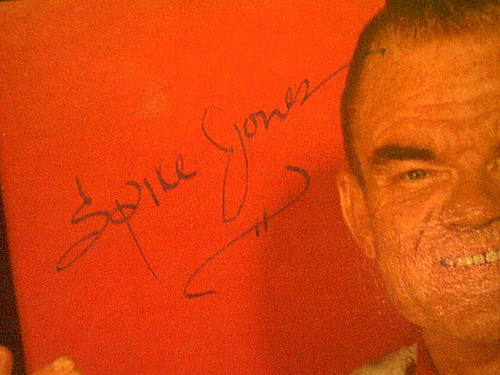