This item is an 8" X 10", black and white photo of actress Jennifer Jones.

Jennifer Jones (born Phylis Lee Isley; March 2, 1919 – December 17, 2009), also known as Jennifer Jones Simon, was an American actress and mental health advocate. Over the course of her career that spanned over five decades, she was nominated for the Oscar five times, including one win for Best Actress, as well as a Golden Globe Award win for Best Actress in a Drama. Jones is among the youngest actresses to receive an Academy Award, having won on her 25th birthday. A native of Tulsa, Oklahoma, Jones worked as a model in her youth before transitioning to acting, appearing in two serial films in 1939. Her third role was a lead part as Bernadette Soubirous in The Song of Bernadette (1943), which earned her the Academy Award and Golden Globe for Best Actress that year. She went on to star in several films that garnered her significant critical acclaim and a further three Academy Award nominations in the mid-1940s, including Since You Went Away (1944), Love Letters (1945), and Duel in the Sun (1946). In 1949, Jones married film producer David O. Selznick, and appeared as the eponymous Madame Bovary in Vincente Minnelli's 1949 adaptation. She appeared in several films throughout the 1950s, including Ruby Gentry (1952), John Huston's adventure comedy Beat the Devil (1953), and Vittorio De Sica's drama Terminal Station (also 1953). Jones earned her fifth Academy Award nomination for her performance as a Eurasian doctor in Love is a Many-Splendored Thing (1955). The photo has been autographed by Jennifer Jones...........................BOTH PHOTO AND AUTOGRAPH ARE IN EXCELLENT CONDITION. 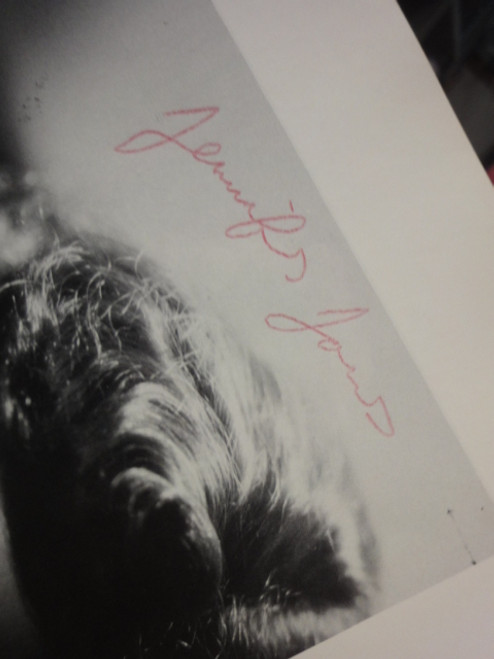