"All The Way With LBJ"-1964-Arcade-sheet music.Lyndon Baines Johnson replaced the assassinated John F. Kennedy as United States president and oversaw major social reforms and the expansion of the Vietnam War. Known as a politician's politician, "LBJ" was a senator from Texas who'd been a powerful member of the Democratic party for two decades when he challenged young Senator Kennedy for the presidential nomination in 1960. (Republican president Dwight D. Eisenhower was stepping down after eight years.) Kennedy got the nod, then picked Johnson as his running mate. Kennedy beat Republican candidate (and Eisenhower's vice-president) Richard M. Nixon, and Johnson became vice-president in 1961. Kennedy was shot by Lee Harvey Oswald on 22 November 1963 and Johnson succeeded to the presidency. Easily re-elected over staunch conservative Barry Goldwater in 1964, LBJ was able to pass sweeping social legislation including the Civil Rights Act and the Voting Rights Act. His decision to escalate American involvement in Vietnam, however, proved to be extremely unpopular. He chose not to seek another term and retired in 1969; he was succeeded by none other than Richard Nixon.The sheet music has been autographed on the front cover by Lyndon Johnson.............BOTH SHEET MUSIC AND AUTOGRAPH ARE IN VERY GOOD CONDITION. 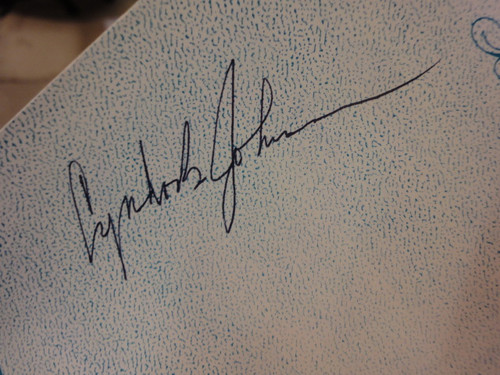