This item is an 8 1/2" X 11",black and white lithograph photo of musician Howard Jones.Howard Jones (born John Howard Jones, 23 February 1955, Southampton, Hampshire, England) is a Welsh musician. According to the Guinness Book of British Hit Singles & Albums, "Jones is an accomplished singer-songwriter who was a regular chart visitor in the mid 1980s with his brand of synthpop. Jones, who was equally popular in the U.S., appeared at Live Aid". Allmusic journalist, Stephen Thomas Erlewine adds, "Jones was one of the defining figures of mid 1980s synthpop. His music merged the technology intensive sound of new wave with the cheery optimism of hippies and late 1960s pop. Jones racked up a string of hits in the mid and late 1980s, before he retreated into being a cult figure in the 1990s".The photo has been autographed on the front by Howard Jones..............BOTH PHOTO AND AUTOGRAPH ARE IN VERY GOOD CONDITION. 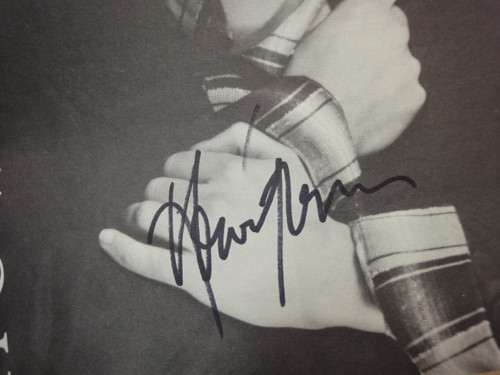