This item is an 8" X 10",black and white photo of actor John Houseman.Before entering the entertainment industry, actor, producer, scriptwriter, playwright and stage director John Houseman, born Jacques Haussmann, first worked for his father's grain business after graduating from college, then began writing magazine pieces and translating plays from German and French. Living in New York, he was writing, directing, and producing plays by his early 30s; soon he had a stellar reputation on Broadway. In 1937, he and Orson Welles founded the Mercury Theater, at which he produced and directed radio specials and stage presentations; at the same time he was a teacher at Vassar. He produced Welles's never-completed first film, Too Much Johnson (1938). Houseman then went on to play a crucial role in the packaging of Welles's first completed film, the masterpiece Citizen Kane (1941): he developed the original story with Herman Mankiewicz, motivated Mankiewicz to complete the script, and worked as a script editor and general advisor for the film. Shortly afterwards, he and Welles had a falling out and Houseman became a vice president of David O. Selznick Productions, a post he quit in late 1941 (after Pearl Harbor) to become chief of the overseas radio division of the OWI. After returning to Hollywood he produced many fine films and commuted to New York to produce and direct Broadway plays and TV specials; in all, the films he produced were nominated for 20 Oscars and won seven. Later he became the artistic director of the touring repertory group the Acting Company, with which he toured successfully in the early '70s. He debuted onscreen at the age of 62 in Seven Days in May (1964), and then in the '70s and '80s played character roles in a number of films. As an actor he was best known as Kingsfield, the stern Harvard law professor, in the film The Paper Chase (1973), his second screen appearance, for which he won a Best Supporting Actor Oscar; he reprised the role in the TV series of the same name. He authored two autobiographies, Run-Through (1972) and Front and Center (1979).The photo has been autographed on the front by John Houseman.............BOTH PHOTO AND AUTOGRAPH ARE IN EXCELLENT CONDITION....................... 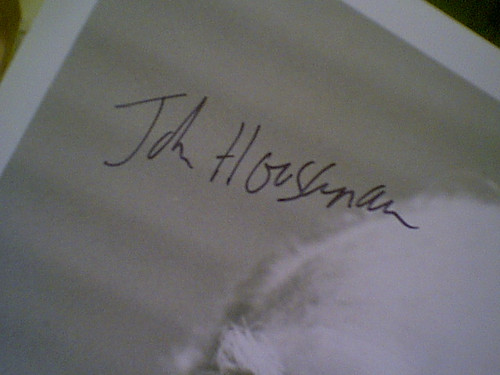