"Love Letters"-1945-Famous Music-sheet music. This song is featured in the 1945 Paramount Movie-"Love Letters". The movie stars Jennifer Jones and Joseph Cotten (spelled "Cotton" on the sheet music) and they are featured on the front cover in an original scene.Ayn Rand wrote this adaptation of Chris Massie's book Pity Mr. Simplicity, about a soldier who falls in love with a former comrade's wife  an amnesiac who may have murdered her husband. The story begins in Italy when two soldiers, Allen Quinton (Joseph Cotten) and Roger Morland (Robert Sully), hatch a scheme concerning Singleton (Jennifer Jones), his girl back home. Allen agrees to write love letters to Singleton for his friend and, based on the heartfelt emotions evident in the letters, she falls in love with Roger. Returning home, Singleton and Roger marry, but Roger proves to be a drunken, abusive husband. One night, as Roger is beating Singleton, he is stabbed to death by her stepmother. Singleton goes in to shock, rendering her unable to recall the murder, while her stepmother has a stroke, making her unable to speak. Accused of murder, Singleton is sentenced to a year in jail. Allen, in the meantime, hears about the murder of his friend and comes to visit Singleton, and the two proceed to fall in love. The sheet music has been autographed on the front cover by Joseph Cotten and Jennifer Jones in blue fountain pen.....................BOTH SHEET MUSIC AND AUTOGRAPHS ARE IN GOOD CONDITION............... 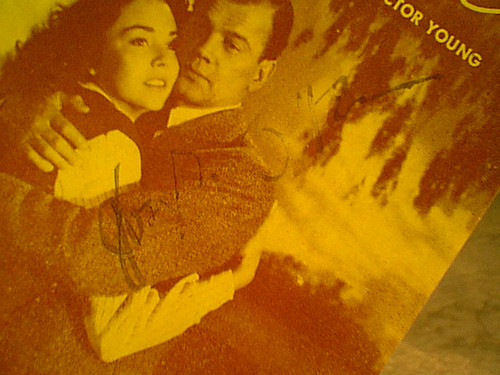