"Stella"-1923-Waterson Berlin-sheet music.Jolson, Al (j?l'sun) [key], 18881950, American entertainer, whose original name was Asa Yoelson, b. Russia. He emigrated to the United States c.1895. The son of a rabbi, Jolson first planned to become a cantor but soon turned to the stage. After his New York City debut in 1899, he worked in circuses, in minstrel shows, and in vaudeville; in 1909 in San Francisco he first sang Mammy in black face, and his style brought him fame and many imitators. The first of his many Broadway appearances was in La Belle Paree (1911); his film work began with The Jazz Singer (1927), the first major film with sound and a landmark in the history of motion pictures. After 1932 he had his own radio show. Among the songs he made famous were April Showers, Swanee, Sonny-Boy, and Mammy. The sheet music has been autographed on the front cover by Al Jolson with a fountain pen in black..........BOTH SHEET MUSIC AND AUTOGRAPH ARE IN VERY GOOD CONDITION. 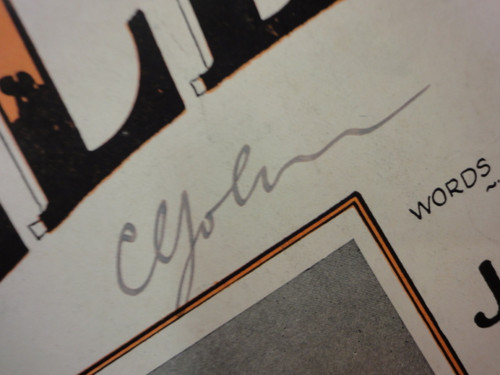