Jimmy Stewart & Henry Fonda Sing "Rolling Stone"(National General white label DJ 007)-"Rolling Stone"/"Theme From "The Cheyenne Social Club"-45 RPM with picture cover.James Stewart and Henry Fonda star in this light-hearted western comedy, directed by Gene Kelly. In 1870 Texas, John O' Hanlan (James Stewart), an itinerant cowboy, receives a letter notifying him that he has inherited a business establishment called the Cheyenne Social Club in Cheyenne, Wyoming. Thinking that he can finally settle down from his hard life on the trail and become a man of property, he travels with his friend Harley O'Sullivan (Henry Fonda) to Cheyenne to claim his property. Once there, he finds the Cheyenne Social Club to be a brothel, run by the attractive Madame Jenny (Shirley Jones). John is appalled, and while Harley is sampling the business's wares, John is planning to close the place down and turn it into a boardinghouse. But when the citizens of Cheyenne get wind of John's plan, they try to convince him to keep the whorehouse the way it is. However, all of this talk is tabled when John finds out that Jenny has been beaten by the disreputable Corey Bannister (Robert J. Wilke). John challenges him to a gunfight and kills him. Suddenly, John and Harley discover that they have the whole Bannister clan after them, and now they have to defend both themselves and the gals at the Cheyenne Social Club. The picture sleeve has been autographed on the front by Jimmy Stewart and Henry Fonda.........CONDITION OF VINYL,COVER AND AUTOGRAPHS IS VG...... 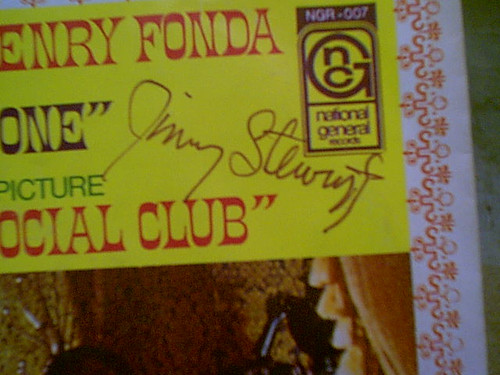