"Seeing Israel With George Jessel"(Strand 1031)-LP. This vintage LP from the 1950's features a tour of Israel narrated by Geroge Jessel. The front cover of the LP features a color photo of George Jessel. His father was a playwright and stage producer. At age nine he began singing professionally; two years later he teamed up with Eddie Cantor in vaudeville. Over the next decade or so he established himself as a major entertainer and songwriter in nightclubs and on Broadway. Jessel appeared sporadically onscreen; his only moderately busy period as a film actor was 1926-30. In 1945 he began producing musical films for Fox. He was known for his charity work, traveling widely and giving lectures and performances to raise funds for various causes; for such activities, in 1969 he was awarded the Jean Hersholt Humanitarian Award, a special Oscar. Jessel often entertained U.S. troops overseas. For a time he was married to actress Norma Talmadge. He authored two volumes of memoirs, So Help Me (1943) and This Way, Miss (1955). The LP has been autographed on the front cover by George Jessel in blue fountain pen...............CONDITION OF VINYL,COVER AND AUTOGRAPH IS VG................ 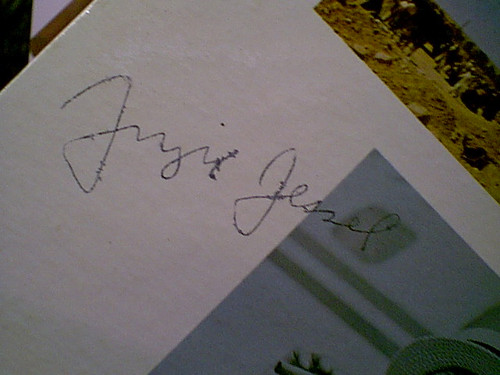