George Jessel-"My Mother's Eyes"-1928-Leo Feist-sheet music. This song was performed by George Jessel in the 1929 Movie-"Lucky Boy".In this drama, with a story that closely parallels the 1927 feature The Jazz Singer, a Jewish son disregards his father's hope that he too will become a jeweler in favor of a show business career. His devoted mother supports him all the way as he goes to California where he is a hit at an amateur show. Unfortunately, when his mother becomes terrible ill, he must curtail his plans and return home to New York. There he finds his real break when he is selected to star in Broadway's newest show Lucky Boy. Songs include: "Lucky Boy," "My Mother's Eyes," "Old Man Sunshine," "My Real Sweetheart," "In My Bouquet of Memories," "My Blackbirds are Bluebirds Now," and "California Here I Come.". The sheet music has been autographed on the front cover by George Jessel with a fountain pen in blue and Eddie Cantor with a fountain pen in brown......................BOTH SHEET MUSIC AND AUTOGRAPHS ARE IN AVERAGE CONDITION................... 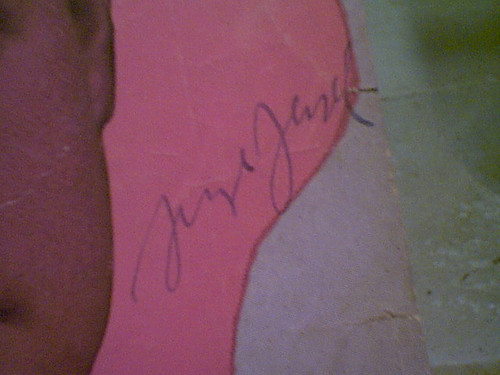