George Jessel and Eddie Cantor-"My Mother's Eyes"-1956-Leo Feist-sheet music. This famous song was performed by George Jessel and Eddie Cantor at the Palace Theatre and they are featured on the front cover in vintage photos....George Jessel (April 3, 1898  May 23, 1981) was a U.S. actor, singer, songwriter, and movie producer. He was famous in his lifetime as a multitalented comedic entertainer, achieving a level of recognition that transcended his limited roles in movies. He was widely known by his nickname, the "Toastmaster General of the United States" (a parody of Postmaster General) for his frequent role as the master of ceremonies at political and entertainment gatherings....Eddie Cantor (January 31, 1892 - October 10, 1964) was an American comedian, singer, actor, songwriter. Known to Broadway, radio and early television audiences as Banjo Eyes, this "Apostle of Pep" was regarded almost as a family member by millions because his top-rated radio shows revealed intimate stories and amusing antics about his wife Ida and five children. This sheet music originally sold for eighty five cents. The sheet music has been autographed on the front cover by George Jessel and Eddie Cantor with fountain pens in blue...BOTH SHEET MUSIC AND AUTOGRAPHS ARE IN VERY GOOD CONDITION.................. 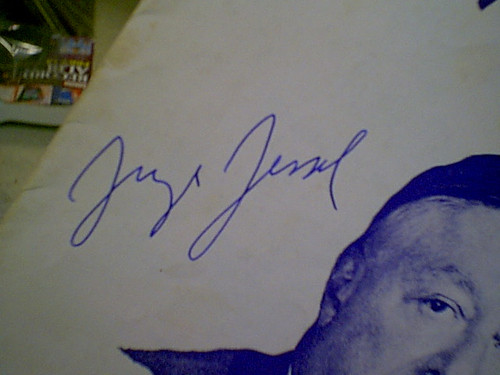