This item is a 5" X 7,black and white lithograph photo of actor Samuel L. Jackson.After 20 years in Hollywood and dozens of movies, Samuel L. Jackson became an international star for his portrayal of Jules, the righteous, afro-clad hit-man in the 1994 film Pulp Fiction. Alternately amusing and menacing on screen, Jackson is one of the busiest actors in the movies, a character actor who can also play the lead and carry a movie. In the 1990s he appeared in fifty movies, including turns in Spike Lee's Jungle Fever (1991, with Wesley Snipes); Steven Spielberg's Jurassic Park (1993); Eve's Bayou (1997, he also produced it); and Quentin Tarantino's Jackie Brown (1997, with Robert DeNiro). Since then he's stayed busy in films, notably as Jedi warrior Mace Windu in the George Lucas Star Wars movies, The Phantom Menace (1999), Attack of the Clones (2002) and Revenge of the Sith (2005). His other films include M. Night Shyamalan's Unbreakable (2000, with Bruce Willis), Changing Lanes (2002, with Ben Affleck), xXx (2002, starring Vin Diesel), The Incredibles (2004, voice) and Coach Carter (2005, with Ashanti). In 2006 his all-out, multimedia promotional blitz for the action feature Snakes On A Plane became a newsworthy event in itself.The lithograph photo has been autographed on the front by Samuel L. Jackson..........BOTH PHOTO AND AUTOGRAPH ARE IN VERY GOOD CONDITION. 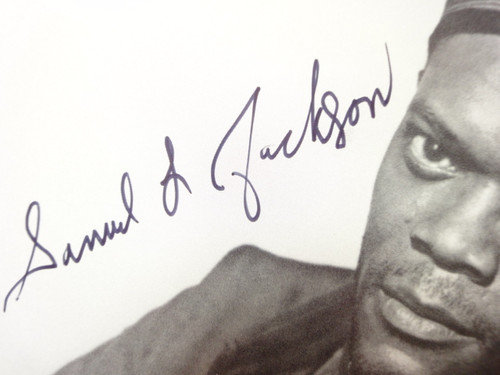