Original Soundtrack-"Barabbas"(Colpix CP 510)-LP. This soundtrack LP features the 1962 Movie-"Barabbas" starring Jack Palance, Anthony Quinn and Silvana Mangano. The LP features a gatefold cover with original scenes from the movie.This 1962 Biblical epic was adapted by Christopher Fry from the novel by Pär Lagerkvist. Anthony Quinn stars as Barabbas, the thief who was pardoned in place of Jesus. For the rest of his life, the guilt-ridden criminal tries to justify his existence and to determine his place in the scheme of things. Along the way he encounters the self-righteous pomposity of Pontius Pilate (Arthur Kennedy), the stoning of Sara (Katy Jurado), the gladiatorial sadism of Torvald (Jack Palance), and the burning of Rome. The film's unbilled Christ is played by Roy Magnano, the brother of Quinn's second-billed costar Silvia Mangano. Watch for the genuine solar eclipse during the Crucifixion sequence, an effect that director Richard Fleischer spent several days preparing for.The LP has been autographed on the front cover by Jack Palance, Anthony Quinn and Silvana Mangano....................CONDITION OF VINYL,COVER AND AUTOGRAPHS IS VG PLUS.............. 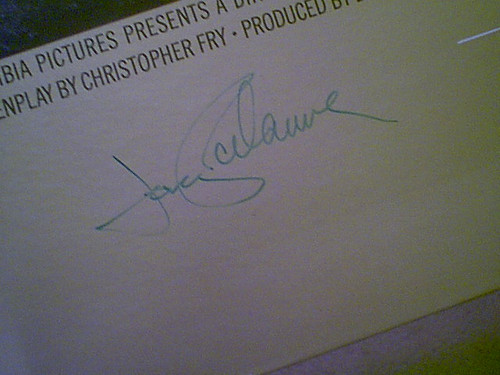