This item is a 3 1/2" X 5 1/2",black and white fan club postcard of actor Jack Palance. Jack Palance (February 18, 1919 - November 10, 2006) was an Oscar-winning American film actor. With his rugged facial features and gravelly voice, Palance was best known to modern movie audiences as both the characters of Curly and Duke in the two City Slickers movies, but his career spanned half a century of film and television appearances.One of the screen's most grizzled actors, Jack Palance defined true grit for many a filmgoer. The son of a Ukrainian immigrant coal miner, he was born Walter Jack Palahnuik on February 18, 1920, in Lattimer Mines, Pennsylvania. As a young man, Palance supported himself with stints as a miner, professional boxer, short-order cook, fashion model, lifeguard, and radio repairman. During WWII service, he enlisted in the AAC and piloted bombers, one of which crashed, knocking him unconscious in the process. The severe burns he received led to extensive facial surgery, resulting in his gaunt, pinched face and, ironically, paving the way for stardom as a character actor. The postcard has been autographed on the front by Jack Palance in blue fountain pen........BOTH POSTCARD AND AUTOGRAPH ARE IN NICE CONDITION.BACK OF POSTCARD HAS WRITING WHICH DOES NOT AFFECT PHOTO OR AUTOGRAPH................ 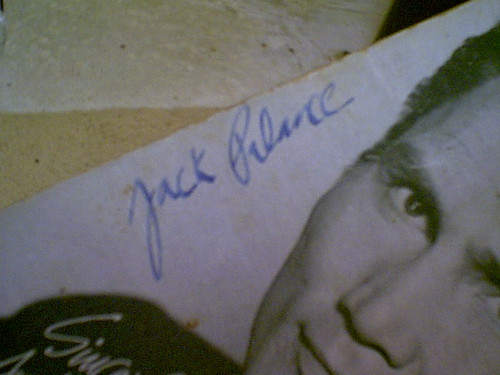