"The Magic Of Michael Jackson"-1984-Starbooks-8 1/2" X 11"-64 pages-softcover souvenir photo book-Signed By Michael Jackson. This vintage souvenir photo book-which originally sold for $4.95-is a giant collection of facts,color photos and interviews of Michael Jackson.A superstar who spanned pop, disco and MTV, Michael Jackson was one of the great music heroes of the late 20th century. But by the time of his sudden death at age 50 in 2009, he was known less for his music than for his erratic behavior, wild spending, and many plastic surgeries. Jackson became a singing star at age 11, when he had four consecutive #1 hits with his youthful band of brothers, The Jackson Five. A cute youngster with a groovy afro and a soulful voice, Jackson became the darling of fans and soon outgrew the band. He went solo in 1972 with the album Got to Be There and embraced the glitter of disco with Off the Wall (1979). After his smash 1982 album Thriller yielded seven top-ten hits (including "Billie Jean" and "Beat It"), Jackson was dubbed "The King of Pop." Jackson was an early star of MTV and an international hitmaker. His distinctive wardrobe featured glittery suits and pseudo-military uniforms matched with the single white glove that became his signature; he also developed a signature dance move, the sliding reverse stroll known as the "moonwalk." The book has been autographed on the front cover by Michael Jackson....................BOTH BOOK AND AUTOGRAPH ARE IN VERY GOOD CONDITION............ 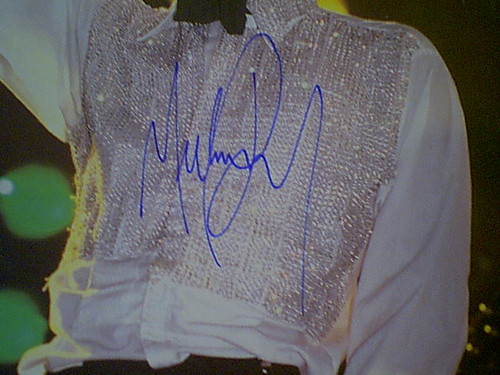