Michael Jackson's Life Story"-Summer 1984-Del-61 pages. This magazine-which originally sold for $2.95-is devoted entirely to Michael Jackson with articles,photos and a poster. A superstar who spanned pop, disco and MTV, Michael Jackson was one of the great music heroes of the late 20th century. But by the time of his sudden death at age 50 in 2009, he was known less for his music than for his erratic behavior, wild spending, and many plastic surgeries. Jackson became a singing star at age 11, when he had four consecutive #1 hits with his youthful band of brothers, The Jackson Five. A cute youngster with a groovy afro and a soulful voice, Jackson became the darling of fans and soon outgrew the band. He went solo in 1972 with the album Got to Be There and embraced the glitter of disco with Off the Wall (1979). After his smash 1982 album Thriller yielded seven top-ten hits (including "Billie Jean" and "Beat It"), Jackson was dubbed "The King of Pop." Jackson was an early star of MTV and an international hitmaker. His distinctive wardrobe featured glittery suits and pseudo-military uniforms matched with the single white glove that became his signature; he also developed a signature dance move, the sliding reverse stroll known as the "moonwalk." Jackson's next album, Bad, topped the charts in 1987. Then his eccentric lifestyle began to overwhelm his recording career, and Jackson became a favorite of the gossip sheets. In 1994 he married Lisa Marie Presley, the daughter of Elvis (a.k.a. "The King"), but they divorced in 1996. Also notorious were Jackson's long series of cosmetic surgeries, rumors of exotic pets (including his chimpanzee pal Bubbles) and superstar peccadilloes at Jackson's ranch estate, dubbed "Neverland", a reference to the story of Peter Pan. His marriage to Presley was followed by another brief marriage to Debbie Rowe (1996-99) and multiple accusations of inappropriate conduct with children. In 2005 he was tried on charges of child molestation and conspiracy related to his relationship with a 13-year-old boy. Jackson was acquitted on all charges after a trial that year. He became increasingly reclusive, appearing in public only behind sunglasses, tinted car windows and silk face masks; reports of lavish spending and unpaid bills became standard fare. Jackson popped back up in London in 2009 to announce a new series of 50 performances in the city's O2 Arena, but died at his rented mansion in Los Angeles before the concerts could take place. An autopsy determined that Jackson died of cardiac arrest after an overdose of the anesthetic propofol, which was being administered to him as a sleep aid by his personal physician, Conrad Murray. Dr. Murray was charged in February of 2010 with involuntary manslaughter. Extra credit: Jackson played the Scarecrow in the 1978 movie The Wiz, a takeoff on The Wizard of Oz; the role was played by Ray Bolger in the original 1939 film... Jackson's sister, Janet Jackson, was a pop superstar of the 1990s... Michael Jackson did not buy the bones of the Elephant Man, despite rumors to the contrary... Jackson had two children with Rowe: son Michael Jr. (called Prince, b. 1997) and daughter Paris Michael Katherine (b. 1998). He also had a third child, Prince Michael II (called Blanket, b. 2002), whose mother has not been publicly named. After Jackson's death, his mother, Katharine Jackson, was awarded custody of the three kids... Thriller has sold over 100 million copies, making it the best-selling album of all time.The magazine has been autographed on the front cover by Michael Jackson................BOTH MAGAZINE AND AUTOGRAPH ARE IN VERY GOOD CONDITION. 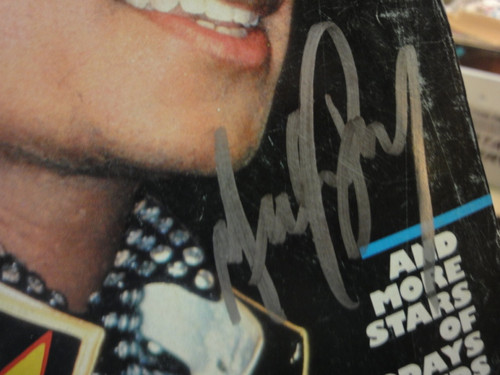