The Jackson Five-"Victory Tour"-1984-11" X 13"-24 pages-color concert program. This vintage color concert program features photos and info on The Jackson Five. Photos include The Jackson Five on tour---in concert---backstage---with celebrities plus early rare photos of Michael and the gang.The Jackson 5 were one of the biggest phenomenons in pop music during the early '70s, and the last great group to come out of the Motown hitmaking machine before Marvin Gaye and Stevie Wonder shifted the label's focus to more individual visions. The Jackson 5's infectious brand of funky pop-soul was a definite departure from the typically smooth, elegant Motown sound, as befitting the group's youth and the dawn of a new decade. That youth, coupled with the merchandising juggernaut that sprang up behind them, inevitably got them tagged a bubblegum group. But they were far more talented musically than that label would suggest, especially lead singer Michael, and their material, while sunny and upbeat, didn't pander to its audience. Solo careers and overexposure gradually weakened the Jackson 5, but their best music still holds up surprisingly well as some of the most vibrant mainstream pop/R&B of its era. The concert program has been autographed on the page with their photo by Michael (Jackson), Jermaine Jackson ,Jackie Jackson, Marlon Jackson and Tito Jackson....................BOTH CONCERT PROGRAM AND AUTOGRAPHS ARE IN VERY GOOD CONDITION.............. 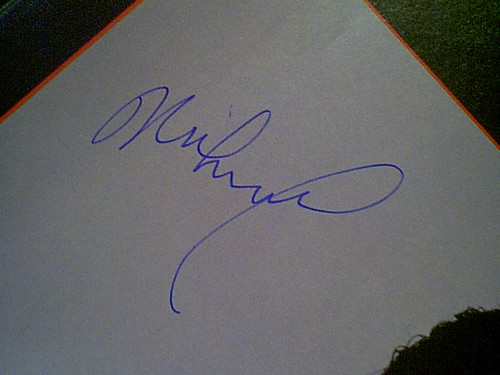