Henry James-"Hawthorne"-1887-Macmillan-London-4 1/2" X 7"-183 pages-Hardcover Book-SIgned By Author.Many consider Henry James to be the master of the psychological novel, and his influence on 20th century English literature is undisputed. An expatriate in London from 1876 to his death (he became a British citizen in 1915), James wrote about European-American and male-female relations, concocting some of the most sophisticated, complex prose you'll ever hope to read. Hollywood dropped the complex prose, kept the costumes and made several films based on James' novels, from 1947's The Lost Moment to 1997's Wings of the Dove.A hand signed cut signature by Henry James with a fountain pen in faded black ink has been affixed to the title page of the book. The cut signature portion is approximately 1/2" X 2 1/2".............BOTH BOOK AND AUTOGRAPH ARE IN VERY GOOD CONDITION. 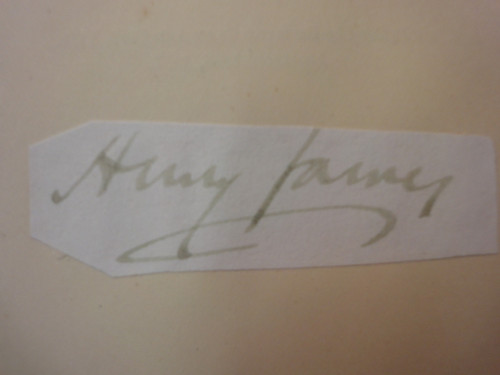