This item is an 8" X 10",black and white photo of actress Glenda Jackson in a scene from the 1988 Movie-"Salome's Last Dance". Also included i s set of 4 additional 8" X 10" photos of scenes from the movie.Ken Russell's adaptation of Oscar Wilde's Salome, Salome's Last Dance takes the form of a play within a film. Wilde (Nickolas Grace) arrives at a brothel with his lover, Bosey (aka Lord Alfred Douglas played by Douglas Hodge), where the proprietor, Alfred (Stratford Johns), has gathered his staff and assorted other colorful characters to mount a simple production of Wilde's new play. And so, with Alfred playing Herod, and Bosey playing John the Baptist, and with Wilde himself looking on with varying degrees of interest, the play is performed. Salome (Imogen Millais-Scott) is the daughter of Herodias (Glenda Jackson), who has abandoned her husband, since murdered, for his brother, Herod. Herod has an eye for Salome, but she mocks his interest. One evening, she hears the ranting of John the Baptist, who is Herod's prisoner, and demands that he be brought before her. She is very taken with the prophet, and attempts to seduce him while the captain of the guards, who is smitten with her, looks on. The young captain kills himself, and the prophet spurns her and is beaten. Still, she insists that she will kiss him, as he is brought away. Salome manipulates the horny Herod, who promises her anything if she will dance for him. She agrees, against the wishes of Herodias. While she performs, Wilde slips off with a young male performer, arousing Bosey's jealousy. After Salome's erotic dance (at the end of which she momentarily changes sexes), she confounds Herod by demanding the prophet's head. Russell himself has a small role in the film, as a photographer of ill repute. One photo has been autographed on the front by Glenda Jackson...............BOTH PHOTOS AND AUTOGRAPH ARE IN VERY GOOD CONDITION..................... 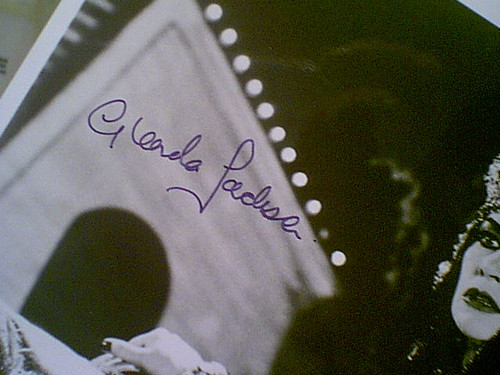