This item is an 8" X 10",black and white photo of actress Anne Jackson.Anne Jackson (born Anna June Jackson; September 3, 1926) is an American actress of television, stage, and screen.Jackson, the youngest of three sisters, was born in Millvale, Pennsylvania, the daughter of Stella Germaine (née Murray) and John Ivan Jackson, a barber who ran a beauty parlor. Jackson's mother was of Irish Catholic background and Jackson's father, whose original name was John Jchekovitch, immigrated from Croatia in 1918.Jackson trained at New York City's Neighborhood Playhouse and The Actor's Studio. She made her Broadway debut in 1945. Her theatre credits include Summer and Smoke, Arms and the Man, Luv, The Waltz of the Toreadors, Mr. Peters' Connections, and Lost in Yonkers. She was nominated for the 1956 Tony Award for Best Featured Actress in a Play for Paddy Chayefsky's Middle of the Night.Jackson's screen credits include The Tiger Makes Out, The Secret Life of an American Wife, How to Save a Marriage and Ruin Your Life, Lovers and Other Strangers, Dirty Dingus Magee, and The Shining. Her many television appearances include Armstrong Circle Theatre, Academy Theatre, The Philco Television Playhouse, Studio One, The Untouchables, The Defenders, Gunsmoke, Marcus Welby, M.D., Rhoda, Highway to Heaven, Law & Order, and ER. She narrated Stellaluna on an episode of the PBS series Reading Rainbow, aired on October 12, 1994.The photo has been autographed on the front by Anne Jackson.........BOTH PHOTO AND AUTOGRAPH ARE IN VERY GOOD CONDITION. 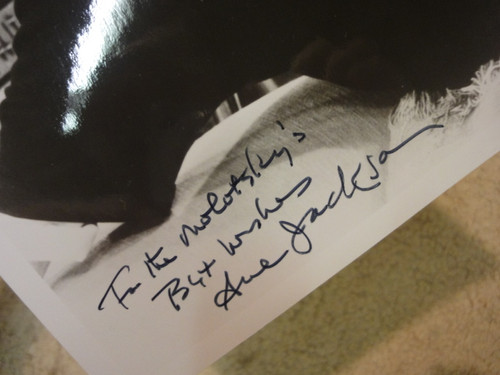