This item is a 10" X 14",color lithograph photo of model Kathy Ireland.Kathy Ireland appeared in 11 straight Sports Illustrated swimsuit issues from 1984-1994. Her green eyes, angular jaw and athletic curves made her one of magazine's most popular models of that era. As her role at SI faded, she became an entrepreneur, signing a deal with K-Mart for her own line of clothing. Her company Kathy Ireland Worldwide has since flourished, selling home furnishings and other "solutions" for families. Forbes magazine reported in 2004 that KIWW products had "generated $1 billion in retail sales" the previous year. Ireland has also dabbled in acting over the years, with roles in the movies Alien From L.A. (1988) and Backfire! (1995) and guest shots on TV shows including Melrose Place (1994), Suddenly Susan (1997) and Touched By an Angel (1999).The color lithograph photo has been autographed on the front by Kathy Ireland............BOTH PHOTO AND AUTOGRAPH ARE IN VERY GOOD CONDITION. 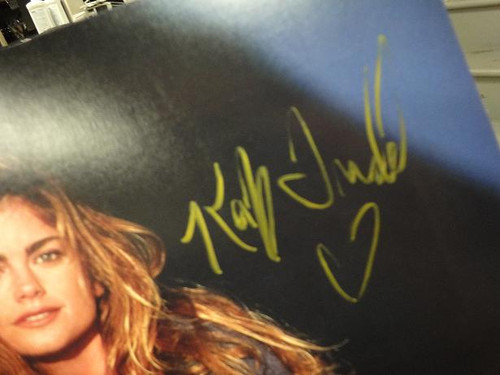