This item is an 11" X 12 1/2" color lithograph photo of actor Jeremy Irons.Jeremy Irons is known as a masterful and slightly unnerving dramatic actor who bounces between serious dramas and popcorn blockbusters. He won a 1991 Oscar as best actor for his uncanny portrayal of the creepy Claus von Bulow in Reversal of Fortune and played twisted twin doctors in David Cronenberg's Dead Ringers (1988), but he's also known for his role as Simon in Die Hard: With A Vengeance (1995, starring Bruce Willis) and as the voice of the villainous Scar in Disney's animated hit The Lion King (1994). He also played Humbert Humbert in Vladimir Nabokov's Lolita (1997, with Melanie Griffith) and starred in the 2000 movie version of Dungeons and Dragons. A versatile and respected actor, he also won a Tony Award in 1984 for The Real Thing. His other films include Damage (1992), The Time Machine (2002), The Man in the Iron Mask (1998, starring Leonardo DiCaprio) and Ridley Scott's Kingdom of Heaven (2005, with Orlando Bloom). The photo has been autographed on the front by Jeremy Irons......................BOTH PHOTO AND AUTOGRAPH ARE IN EXCELLENT CONDITION........ 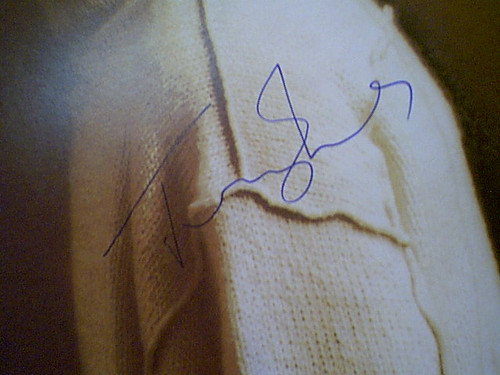