This item is an 8" X 10",black and white photo of Martha Hyer and George Montgomery in a scene from the 1954 Movie-"Battle Of Rogue River".George Montgomery heads the virile cast of the B-plus western Battle of Rogue River. Montgomery plays Cavalry major Frank Archer, assigned to protect the settlers in Oregon territory. Archer tries to find out why the previously peaceful Indians have suddenly become warlike. What he doesn't know is that duplicitous settler Stacey Wyatt (Richard Denning), working in concert with crooked land speculator Matt Parrish (Charles Evans), has been deliberately aggravating the Indians so that the other whites will be erased from the territory, thereby allowing Wyatt and his chums to plunder the land's rich mineral deposits. Curiously, the film's titular battle never takes place! Martha Hyer provides a dash of femininity to the otherwise all-male proceedings. The photo has been autographed on the front by Martha Hyer with a fountain pen in black and George Montgomery with a fountain pen in blue....................BOTH PHOTO AND AUTOGRAPHS ARE IN VERY GOOD CONDITION.................... 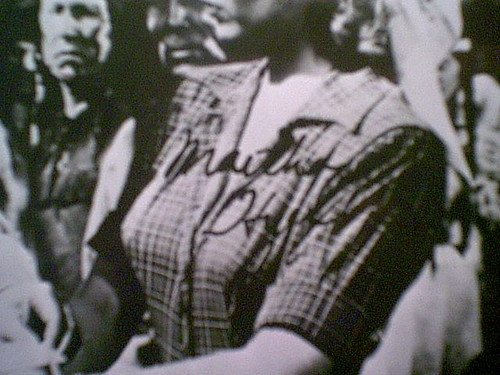