This item is a set of 10-8" X 10",black and white photos features the 1966 movie-"The Bible-In The Beginning" starring John Huston, George C. Scott and Stephen Boyd.The Bible was intended by producer Dino De Laurentiis as the first in a series of films which would eventually cover the Old and New Testament in their entirety. The many directors engaged for this project dropped out one by one, leaving only the adventurous John Huston. As a result, this film was the first and last in the series; its subtitle In the Beginning refers to the fact that only the first 22 chapters of Genesis ended up on film. After creation, we are introduced to the buff-naked Adam and Eve (Michael Parks and Ulla Bergyd), whose fall from grace segues into the Cain and Abel story. Next on the docket is the story of Noah, played by director Huston, who'd originally wanted Charlie Chaplin for the role. Abraham's sacrifice is then dramatized, with George C. Scott as the beleaguered protagonist. In quick succession, we are offered the Tower of Babel, the defiance of Nimrod, and Sodom and Gomorroh. Tying together these Old Testament episodes is Peter O'Toole as three angels; Ava Gardner also shows up in the role of Sarah.One photo has been autographed by John Huston on the front. One photo has been autographed by George C. Scott on the front and one photo has been autographed by Stephen Boyd on the front............BOTH PHOTOS AND AUTOGRAPHS ARE IN VERY GOOD CONDITION................ 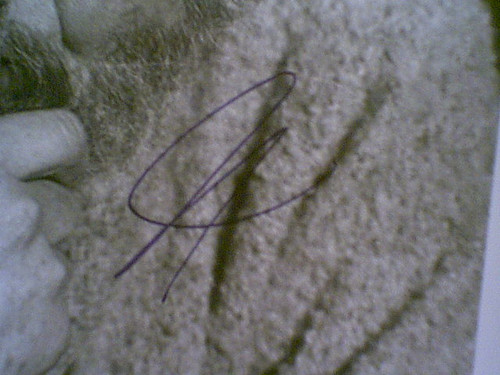