Original TV Soundtrack-"Huckleberry Hound-The Great Kellogg's TV Show"(Colpix CP 202)-LP. This vintage television soundtrack LP was released in 1959 and books for $200.00 in Mint condition. The front cover of the LP features original animation artwork.Huckleberry "Huck" Hound is a fictional cartoon character created by Hanna-Barbera, and the star of the 1958 animated series The Huckleberry Hound Show, Hanna-Barbera's second series made for television after The Ruff & Reddy Show. The Huckleberry Hound Show was probably the series that truly made Hanna-Barbera a household name, thanks to Huckleberry (or "Huck" as he was sometimes nicknamed, referencing the novel Adventures of Huckleberry Finn) and the two supporting segments of the show: Yogi Bear and his sidekick Boo Boo, and Pixie and Dixie, two mice who in each short found a new way to outwit the cat Mr. Jinks. After Yogi Bear was given his own show in 1961, his segment was replaced with one featuring Hokey Wolf and his sidekick Ding-a-Ling.The LP has been autographed on the front cover by Bill Hanna and Joe Barbera with fountain pens in black..........CONDITION OF VINYL,COVER AND AUTOGRAPHS IS VG PLUS.................... 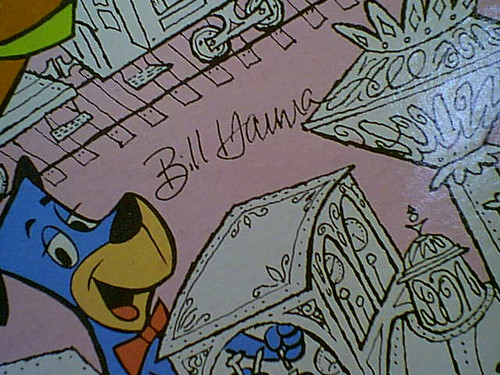