Langston Hughes-"Simple's Uncle Sam"-1965-Keith Jennison-Large Print Edition-8" X 11"-180 pages-Hardcover Book-With Jacket-Signed By Author. James Mercer Langston Hughes (February 1, 1901 – May 22, 1967) was an American poet, social activist, novelist, playwright, and columnist from Joplin, Missouri. One of the earliest innovators of the literary art form called jazz poetry, Hughes is best known as a leader of the Harlem Renaissance. He famously wrote about the period that "the Negro was in vogue", which was later paraphrased as "when Harlem was in vogue."............Langston Hughes is best known as a poet, but he was also a prolific writer of theater, autobiography, and fiction. None of his creations won the hearts and minds of his readers as did Jesse B. Semple, better known as "Simple." Simple speaks as an Everyman for African Americans in Uncle Sam's America. With great wit, he expounds on topics as varied as women, Gospel music, and sports heroes--but always keeps one foot planted in the realm of politics and race. In recent years, readers have been able to appreciate Simple's situational humor as well as his poignant questions about social injustice in The Best of Simple and The Return of Simple. Now they can, once again, enjoy the last of Hughes's original Simple books. The book has been autographed on the title page by Langston Huges........BOTH BOOK AND AUTOGRAPH ARE IN EXCELLENT CONDITION. 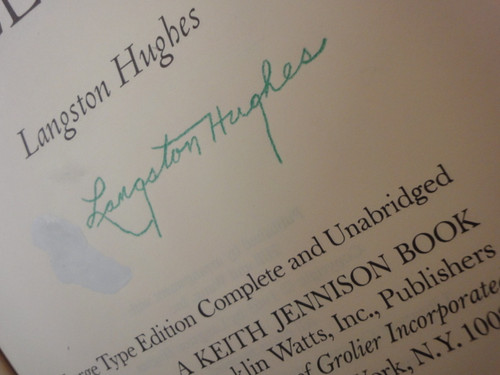