TV Record Superstars Magazine-August 1970-65 pages. This vintage magazine-which originally sold for fifty cents-features a cover color photo of Englebert Humperdinck plus an article with photos.Engelbert Humperdinck (born Arnold George Dorsey, 2 May 1936)[1] is an Anglo-Indian pop singer, best known for his number one hits "Release Me" and "The Last Waltz", as well as "After the Lovin'" and "A Man Without Love".Born in Madras, India, as a child Dorsey moved to Leicester, England, where he took an early interest in music. Initially playing the saxophone in nightclubs, he soon moved into singing, releasing his first single, "I'll Never Fall in Love Again", in 1958. After struggling with tuberculosis, in the mid-1960s Dorsey returned to his musical career, adopting the stage name "Engelbert Humperdinck" after the German 19th-century composer of operas. Signed to Decca Records, he gained early success in Belgium after representing England in the 1966 Knokke song contest there. Returning to the United Kingdom, he released a string of singles that proved commercially successful both domestically and in the United States. Gaining a devoted fan following, he also fronted a short-lived television series, The Engelbert Humperdinck Show.The magazine has been autographed on the front cover by Engelbert Humperdinck...............BOTH MAGAZINE AND AUTOGRAPH ARE IN VERY GOOD CONDITION. 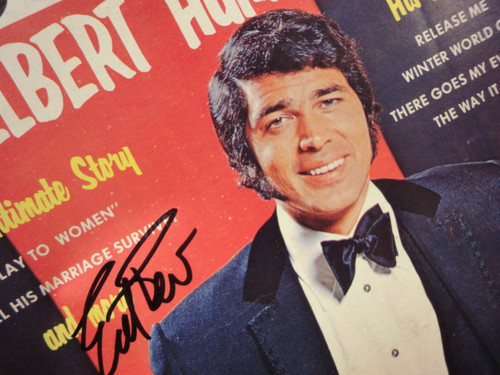