THIS IS AN AUTHENTICALLY AUTOGRAPHED LP BY CHET HUNTLEY AND DAVID BRINKLEY... VOICES AND EVENTS OF THE YEAR...NARRATION BY CHET HUNTLEY AND DAVID BRINKLEY-A TIME TO KEEP: 1964(RCA LOC 1096)LP HAS GATEFOLD COVER AND ORIGINAL RCA INNER SLEEVE. BACK PHOTO COVER IS SIGNED BY CHET HUNTLEY AND DAVID BRINKLEY. INCLUDES SUCH EVENTS AS: VOICES OF PROTEST CHALLENEGE THE OLD DISCIPLINES, SEN BARRY GOLDWATER ENTERS THE PRESIDENTIAL RACE, CASSIUS CLAY DEFEATS SONNY LISTON, TOPLESS BATHING SUIT, NY WORLDS FAIR OPENS, MOBS RIOT IN CITIES IN THE NORTH, REPUBLICAN CONVENTION HIGHLIGHTS AND MORE. CONDITION OF THE VINYL,COVER, AND AUTOGRAPH IS VG. Chester Robert "Chet" Huntley (December 10, 1911 - March 20, 1974) was an American television newscaster. Huntley was born in Cardwell, Montana. He graduated from Whitehall High School in Whitehall and attended Montana State College in Bozeman and Cornish College of the Arts in Seattle before graduating from the University of Washington in 1934. He began his radio newscast career at Seattle's KIRO AM, later working on radio stations in Spokane, Washington and Portland, Oregon. He went to work for CBS Radio from 1939 to 1951, at which point he moved to ABC Radio. In 1955, he joined the NBC Radio network, viewed by network executives as "another Ed Murrow." David McClure Brinkley (July 10, 1920  June 11, 2003) was a popular American television newscaster for NBC and later ABC. From 1956 through 1970, he co-anchored NBC's top rated nightly news program, The HuntleyBrinkley Report with Chet Huntley. In 1970, the broadcast was renamed NBC Nightly News, with Brinkley, John Chancellor, and Frank McGee co-anchoring. Later, in the 1980s and 1990s, Brinkley was a top commentator on election coverage for ABC News, and was host of the popular Sunday This Week program. 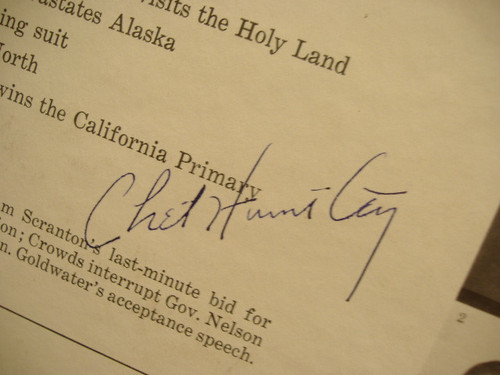