This item is an 8" X 10 1/2" print of a black and white charcoal sketch of actor William HOlden. The portrait print is from 1962 and features William Holden as she starred in the 1953 Movie-"Stalag 17".Stalag 17 is a 1953 war film which tells the story of a group of American airmen held in a German World War II prisoner of war camp, who come to suspect that one of their number is an informant. It was adapted from a Broadway play.Produced and directed by Billy Wilder, it starred William Holden, Don Taylor, Robert Strauss, Neville Brand, Harvey Lembeck, Peter Graves, Sig Ruman and Otto Preminger in the role of the camp's commandant. Strauss and Lembeck both appeared in the original Broadway production.The portrait print has been autographed on the front by William Holden with a fountain pen in red.........BOTH PORTRAIT PRINT AND AUTOGRAPH ARE IN VERY GOOD CONDITION. 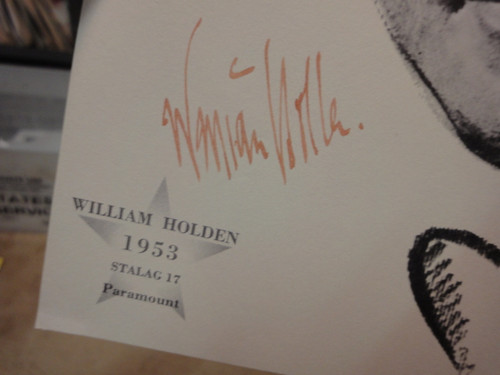