Original Soundtrack-"The Bridge On The River Kwai"(Columbia 9426)-Lp. This original soundtrack Lp features the 1957 MOvie-"The Bridge On The River Kwai" starring William HOlden,Alec Guinness and Jack Hawkins.The Bridge on the River Kwai opens in a Japanese prisoner-of-war camp in Burma in 1943, where a battle of wills rages between camp commander Colonel Saito (Sessue Hayakawa) and newly arrived British colonel Nicholson (Alec Guinness). Saito insists that Nicholson order his men to build a bridge over the river Kwai, which will be used to transport Japanese munitions. Nicholson refuses, despite all the various "persuasive" devices at Saito's disposal. Finally, Nicholson agrees, not so much to cooperate with his captor as to provide a morale-boosting project for the military engineers under his command. The colonel will prove that, by building a better bridge than Saito's men could build, the British soldier is a superior being even when under the thumb of the enemy. As the bridge goes up, Nicholson becomes obsessed with completing it to perfection, eventually losing sight of the fact that it will benefit the Japanese. Meanwhile, American POW Shears (William Holden), having escaped from the camp, agrees to save himself from a court martial by leading a group of British soldiers back to the camp to destroy Nicholson's bridge. Upon his return, Shears realizes that Nicholson's mania to complete his project has driven him mad. Filmed in Ceylon, Bridge on the River Kwai won seven Academy Awards, including Best Picture, Best Director for the legendary British filmmaker David Lean, and Best Actor for Guinness. It also won Best Screenplay for Pierre Boulle, the author of the novel on which the film was based, even though the actual writers were blacklisted writers Carl Foreman and Michael Wilson, who were given their Oscars under the table. The LP has been autographed on the front cover by William Holden,Jack Hawkins and Alec Guinness........CONDITION OF VINYL,COVER AND AUTOGRAPHS IS VG....................... 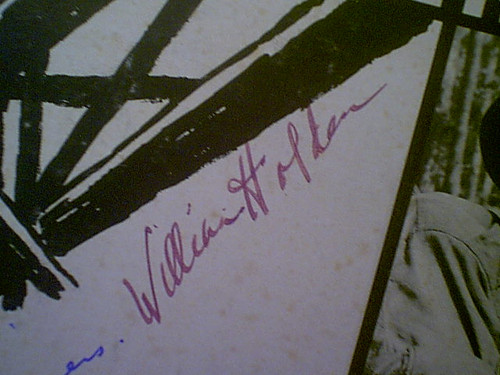