This item is a 7" X 9",black and white photo of Trevor Howard and Angie Dickinson in a scene from the 1966 Movie-"The Poppy Is Also A Flower". The photo also has an original dated byline on ABC Stationery explaining photo and giving date of broadcast.This exciting adventure provides an interesting look into the manufacture and trafficking of opium and heroin. The original story was written by Ian Fleming who died shortly before he was to pen the screenplay. The story is set in Iran and opens as an American undercover agent is murdered in the desert while attempting to buy opium. Two more agents are sent to Teheran to investigate the death and stop the powerful drug ring behind the smuggling. Once there, they run into the dead agent's girlfriend, who soon after suddenly disappears. Unfortunately, they cannot find her and so focus on their other job. To figure out where the drugs are going (and hopefully get a lead on the missing girl) they steal a bunch of opium and lace it with radioactive tracers so they can track it with Geiger counters. They then follow the drugs as they are slowly dispersed throughout Europe. After many twists, turns and blind alleys, the agents eventually succeed. This film was originally made for TV and contains cameos from many stars who worked for little pay because they strongly supported its anti-drug message. The photo has been autographed on the front by Trevor Howard and Angie Dickinson....CONDITION OF PHOTO,BYLINE AND AUTOGRAPHS IS EXCELLENT................... 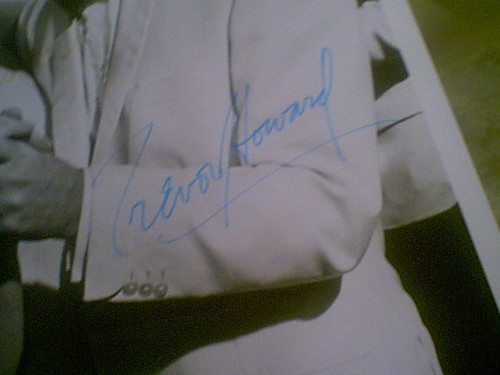