Original Soundtrack-"Tootsie"(Warner Brothers 23781)-LP. This soundtrack LP features the 1982 Movie-"Tootsie". The movie stars Dustin Hoffman and he is featured on the front and back covers of the LP in original color scenes.Michael Dorsey (Dustin Hoffman), a brilliant but troublesome New York actor, has managed to alienate every producer on both coasts. Michael's agent George Fields (Sydney Pollack) can't even get his client a commercial since Michael complained that the tomato he was playing wasn't properly motivated. "You were a tomato!" screams George in desperation, adding that Michael is so obnoxious that he will probably never work again. Dorsey thinks otherwise; when he hears of an opening on a popular soap opera, he applies for the jobeven though the job is for a woman. Posing as "Miss Dorothy Michaels," Michael wins the part and becomes a widely-known actress. Yet complications ensue when Michael falls for his co-star Julie (Jessica Lange, in an Oscar-winning performance) but, as Dorothy, is courted by Julie's widowed father (Charles Durning). Michael ultimately finds that his disguise as a woman has made him a better man. One of the classic comedies of the 1980s, Tootsie's gender-bending premise boasts a screenplay by Larry Gelbart and Murray Schisgal, and by a host of memorable supporting comic performances from Dabney Coleman, Teri Garr, George Gaynes, and Bill Murray. Future Oscar-winner Geena Davis makes her screen debut as a daytime drama queen, which indeed she had been before Tootsie came along. The LP has been autographed on the front cover by Dustin Hoffman...............CONDITION OF VINYL,COVER AND AUTOGRAPH ARE MINT MINUS................. 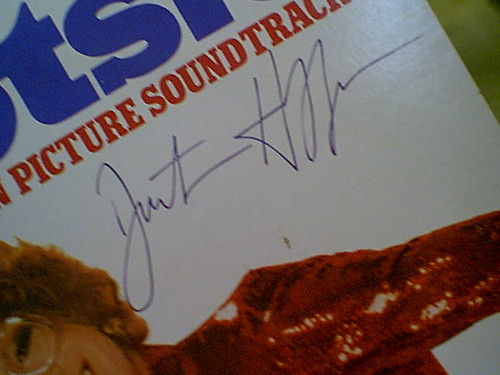