This is an authentically autographed TV GUIDE by Stanley Holloway... TV GUIDE-Nov 3 1962-Photo cover is signed by Stanley Holloway, condition of the TV GUIDE and autograph is VERY GOOD. Stanley Augustus Holloway, OBE (1 October 1890  30 January 1982) was a celebrated English stage and film actor, comedian and singer, famous for his comic and character roles on stage and screen, especially that of Alfred P Doolittle in My Fair Lady. He was also renowned for his recordings of comic monologues and songs, which spanned throughout his seventy-year career. His acting roots in his family could be traced back to his great-uncle Charles Bernard in the mid 1800s, who was one of the greatest Shakespearean actors of his time. Holloway himself was an effective performer of Shakespeare, playing the First Gravedigger in Laurence Olivier's film version of Hamlet in 1948 and transferring the role to the stage with John Gielgud in 1951. 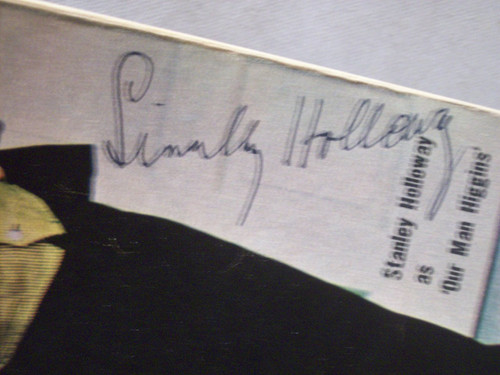