THIS IS AN AUTHENTICALLY AUTOGRAPHED PHOTO BY ROBERT HOOKS AND PAULA KELLY... THIS IS A 8 INCH BY 10 INCH BLACK AND WHITE PHOTO SIGNED BY ROBERT HOOKS AND PAULA KELLY RELEASED IN 1972. CONDITION OF THE PHOTO AND AUTOGRAPH IS VERY GOOD. Trouble Man is a 1972 blaxploitation film produced and released by 20th Century Fox. The film stars Robert Hooks as "Mr. T.", a hard-edged private detective who tends to take justice into his own hands. Although the film itself was unsuccessful, it is still of note today for its successful soundtrack, written, produced and performed by Motown artist Marvin Gaye. Like Isaac Hayes and Curtis Mayfield before him, Gaye became the next in a line of soul music stars who recorded soundtracks for films aimed at African American audiences. While the Trouble Man film was a flop, the Trouble Man soundtrack and single became successes for Gaye. The movie had the distinction of being featured in the 1978 Michael & Harry Medved book, 'The 50 Worst Films of All Time". 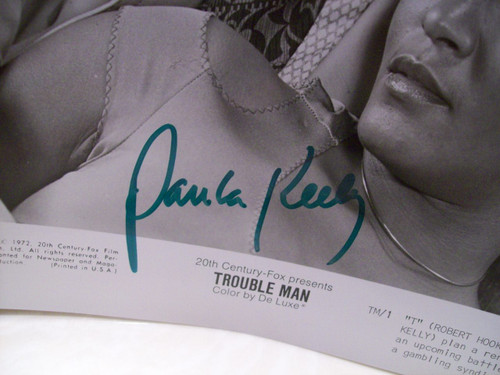