"The Wrestling Album" (Epic 40223)-LP. This unique LP was released in 1985 and features all your favorite WWF Wrestlers. The LP features a gatefold cover with photos of the wrestlers there and on the front and back covers (ncluding Jesse Ventura!).Tracks and wrestlers include-Hillbilly Jim-Don't Go Mess With A Country Boy....Nikolai Volkoff-Cara Mia...Mean Gene Okerlund-Tutti Frutti...The Wrestlers-Land Of A Thousand Dancers...Junk Yard Dog-Grab Them Cakes...Jimmy Hart-Eat Your Hart Out Rick Springfield...Real American-Windham and Rotundo's Theme...Rowdy Roddy Piper-For Everybody...Captain Lou Albano-History Of Music...WWF All Stars-Hulk Hogan's Theme. Louis Albano (born July 29, 1933 in Carmel, New York), better known as Captain Lou, is an Italian-American professional wrestler and manager. With an over-the-top personality and a penchant for making boisterous declarations, Albano was the epitome of the antagonistic manager that raised the ire of wrestlers and incited the anger of spectators. Throughout his forty year career, Albano guided 15 different tag teams and 4 singles competitors to championship gold. A unique showman, with an elongated beard, rubberband facial piercings, and loud outfits, he was the forefather of the 1980s Rock 'n' Wrestling explosion. Collaborating with Cyndi Lauper, Albano helped usher in wrestling's crossover success with a mainstream audience. Capitalizing on his success, the Hall of Famer later ventured into Hollywood with various television, film, and music projects.The LP has been autographed on the front cover by Lou Albano in red and on the back cover by Hulk Hogan in green.......CONDITION OF VINYL,COVER AND AUTOGRAPHS ARE VG................. 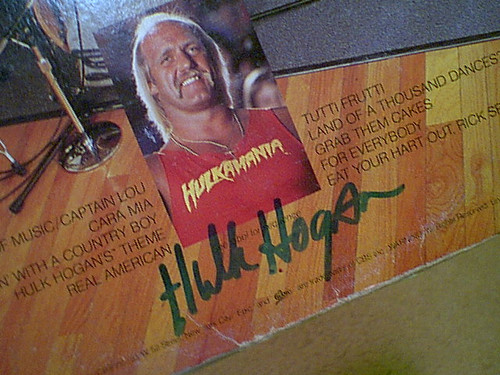