Eddie Hodges(Cadence 1397)-"I'm Gonna Knock On Your Door"/"Ain't Gonna Wash For A Week"-45 RPM with picture sleeve.Eddie Hodges (born March 5, 1947) is a United States former child actor and recording artist who left show business as an adult.At the age of 14, Hodges recorded for Cadence Records and his biggest hit was "I'm Gonna Knock On Your Door" in 1961. He also scored a minor hit with "(Girls, Girls, Girls) Made to Love," a song written by Phil Everly and originally recorded by The Everly Brothers. He recorded for several other record labels. Before he left Hollywood, he was a union musician, record producer, song writer and music publisher. He collaborated with Tandyn Almer ("Along Comes Mary") with whom he wrote and published several songs and owned his own music publishing business. Hodges continues to write songs today but is no longer involved in the music business.The picture sleeve has been autographed on the front by Eddie Hodges with a fountain pen in blue......CONDITION OF VINYL,PICTURE COVER AND AUTOGRAPH IS VG....................... 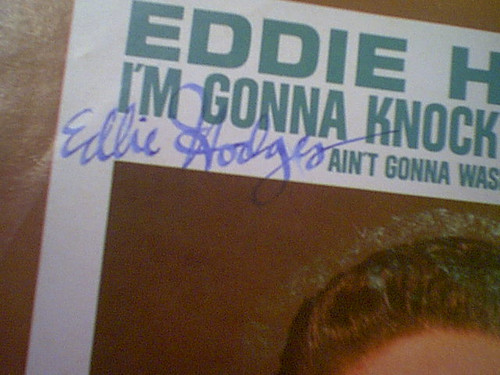