"Midnight Cowboy"-1969-Edwin Morris-sheet music. This famous theme song is featured in the 1969 United Artists Movie-"Midnight Cowboy". The movie stars Dustin Hoffman and Jon Voight and they are featured on the front cover of the sheet music in an original scene.Based on a James Leo Herlihy novel, British director John Schlesinger's first American film dramatized the small hopes, dashed dreams, and unlikely friendship of two late '60s lost souls. Dreaming of an easy life as a fantasy cowboy stud, cheerful Texas rube Joe Buck (Jon Voight) heads to New York City to be a gigolo, but he quickly discovers that hustling isn't what he thought it would be after he winds up paying his first trick (Sylvia Miles). He gets swindled by gimpy tubercular grifter Rico "Ratso" Rizzo (Dustin Hoffman) but, when Joe falls in the direst of straits, Ratso takes Joe into his condemned apartment so that they can help each other survive. Things start to look up when Joe finally lands his first legit female customer (Brenda Vaccaro) at a Warhol-esque party; Ratso's health, however, fails. Joe turns a final trick to get the money for one selfless goal: taking Ratso out of New York to his dream life in Miami. One of the first major studio films given the newly minted X rating for its then-frank portrayal of New York decadence, Midnight Cowboy was critically praised for Schlesinger's insight into American lives, with the intercut mosaic of Joe's memories and Ratso's dreams lending their characters and actions greater psychological complexity. While they may have been drawn by the seamy content (tame by current standards), the young late '60s audience responded to Joe's and Ratso's confusion amidst turbulent times and to the connection they make with each other despite their alienation from the surrounding culture. Midnight Cowboy became one of the major financial and artistic hits of 1969, winning Oscars for Best Picture (the first for an X-rated film), Best Director, and former blacklistee Waldo Salt's screenplay. The sheet music has been autographed on the front cover by Dustin Hoffman and Jon Voight................BOTH SHEET MUSIC AND AUTOGRAPH S ARE IN EXCELLENT CONDITION............... 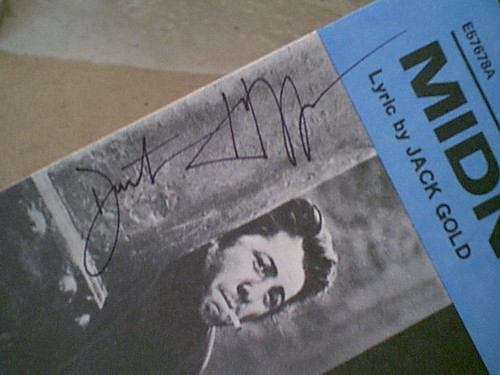