This item is an 8" X 10",black and white photo of Dustin Hoffman in a scene from the 1979 Movie-"Kramer Vs. Kramer".Robert Benton's Oscar-winning adaptation of Avery Corman's bestseller takes on contemporary problems of divorce and shifting gender roles, as a jilted husband learns how to be a nurturing father. Manhattan housewife Joanna Kramer (Meryl Streep) walks out on her workaholic ad man husband Ted (Dustin Hoffman), leaving their young son Billy (Justin Henry) in Ted's less than capable hands. Through trial and error, Ted learns how to take care of Billy, devoting more energy to his family than to his work, and finally losing his high-powered job because of his new priorities. When Joanna returns with her own lucrative job and the intent to take custody of Billy, Ted finds employment that won't interfere with his paternal duties. Even though he proves that he can do it all, Joanna still wins in court. Joanna, however, rethinks her desires when she finally grasps how close father and son have become. Addressing the male side of the self-actualization question, previously explored from the female perspective in such 1970s movies as An Unmarried Woman (1978), Alice Doesn't Live Here Anymore (1974), and The Turning Point (1977), Kramer focuses on Ted's evolution from absent parent to ideal father, as he learns to balance domestic and professional lives in the shifting late-1970s social landscape. Joanna's attempt to achieve the same, however, gets buried; only Streep's sensitive performance prevents Joanna from seeming an unsympathetic harridan. Critics praised the film's realistic depiction of Ted's travails, as well as the three lead actors' work; and audiences, perhaps facing the same questions of divorce and self-realization, turned it into a box-office smash. It went on to win five Oscars, including Best Picture, Best Actor, and Best Supporting Actress. The photo has been autographed on the front by Dustin Hoffman............BOTH PHOTO AND AUTOGRAPH ARE IN VERY GOOD CONDITION............ 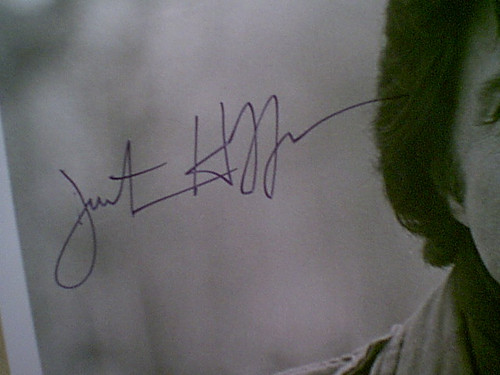