This item is an 8" X 10",black and white photo of actor Dustin Hoffman in a scene from the 1972 Movie-"Alfredo Alfredo". The photo has an original typed byline on Paramount Pictures stationery describing the scene.This mildly amusing satire of Italian marital customs concerns a meek bank teller (Dustin Hoffman) who has an affair with pretty Carla Gravina, then learns that he is unable to get a divorce from his tiresome wife (Stefania Sandrelli). Hoffman learned his lines in Italian before making Alfredo, Alfredo, only to discover that it was being filmed in English and redubbed. Although it has its moments, the film has aged badly, particularly with regard to its views of women, who are portrayed as either sex kittens or shrews.The photo has been autographed on the front by Dustin Hoffman........CONDITION OF PHOTO,AUTOGRAPH AND BYLINE IS VERY GOOD...................... 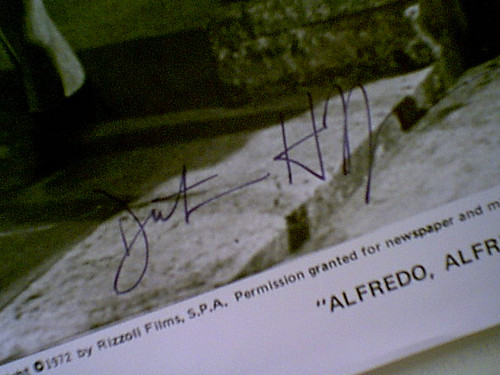