"It's Howdy Doody Time"(RCA 4546)-LP. This LP was released in 1971 and features Buffalo Bob Smith,Howdy Doody and the original cast. Tracks include-It's Howdy Doody Time,Howdy Doody's Do's And Don'ts,Howdy Doody's Magic Juke Box.Though the original children's show left the airwaves in 1960 after a 13-year run and Buffalo Bob Smith has indeed seen his last round up, he and puppet companion Howdy Doody will remain cherished in the hearts of first wave baby boomers as icons of 1950s childhood. Born Robert Schmidt, the son of a coal miner and the grandson of a Lutheran minister, Buffalo Bob's family initially pushed him towards a music career. He started taking piano lessons at age eight and at age 11 became a church accompanist. Seeing that his son was musically gifted, Buffalo Bob's father insisted he practice every day. One time, he poked a hole in young Bob's football to remind him that football practice was to come after his piano lessons. Smith was 15 when he got a job playing piano and singing on a local radio station. For a while, he was part of a trio called the HiHatters and got to tour the country with Kate Smith. At age 17, he joined an NBC radio station in Buffalo, NY. There, he was groomed as the network's answer to their competitor's phenomenally popular Arthur Godfrey. Smith held his own, but did not become popular until his rival retired from radio. Soon his radio show was the most highly rated in New York. It was during this period that NBC executives asked Smith to create a radio show for children. For the show, he created a character called Elmer, who opened and closed the show with a hearty "Howdy Doody!" In late 1947, NBC again called Smith, this time asking him to create a one-hour live children's television series. They gave him four days to create the show and get it on the air. Miraculously, Smith succeeded and earned high ratings to boot. Interestingly, though his character Howdy Doody was to play a major role in the show, he didn't actually appear until the fourth episode because the puppet was still under construction. For the first three shows, Howdy's voice was heard coming from a desk drawer. Shortly after the series was established, Smith began adding new characters, some real and some puppets. Doodyville's newest residents included the clown Clarabell, Princess Winterspring Summerfall, Flub-a-dub, Phineas T. Bluster, Dilly Dally, and Chief Thunderthud (the puppets were operated by Rufus Rose). Smith called his youthful audience the Peanut Gallery. Every episode contained plenty of funny business, but also provided valuable advice and safety tips for young viewers. For its entire 13-year run, Smith's little homemade show remained a ratings phenomenon and generated scads of money from merchandising. Smith cashed in on his popularity by appearing in television commercials. In 1950, he sold Howdy Doody to NBC for a tidy profit. As part of the deal, Smith was able to keep the name Buffalo Bob, his likeness, and his costumes. After the show ended in 1960, the marionettes were given to puppet master Rufus Rose. In 1954, Smith suffered a near-fatal heart attack. A real trouper, he televised the show out of a special studio from his home until he recovered. The Lp has been autographed on the front cover by Howdy Doody and Buffalo Bob Smith in black.....CONDITION OF VINYL,COVER AND AUTOGRAPHS IS VG.TOP OF COVER HAS A CUT OUT NOTCH................... 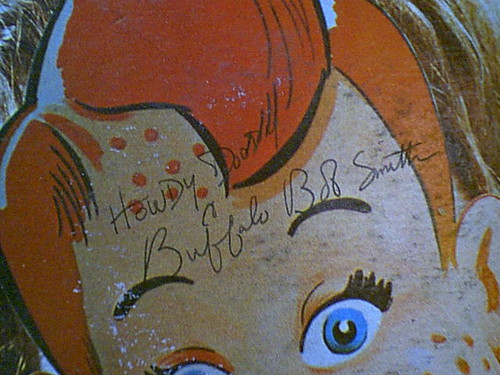