Original Soundtrack-"The Trip"(Sidewalk 5908)-LP. This soundtrack LP features the 1967 Roger Coroman movie "The Trip". The movie stars Dennis Hopper,Peter Fonda,Bruce Dern and Susan Strasberg.The Trip (1967) is a unique low-budget cult film released by American International Pictures, directed by Roger Corman, and shot on location in and around Los Angeles, including on top of Kirkwood in Laurel Canyon, Hollywood Hills, and near Big Sur, California in 1966. Peter Fonda stars as a young television commercial director, Paul Groves. In this plot-free drama Groves takes his first dose of LSD, while experiencing the heartbreak and ambivalence of divorce from his beautiful but adulterous wife, played by Susan Strasberg. He starts his trip with a "guide," John Bruce Dern, from whom out of fear, Groves runs away and abandons. As Groves experiences his trip, he wanders around the Sunset Strip, into nightclubs, and the homes of strangers and acquaintances, he considers the roles played by commercialism, sex, love, the role of women in his life, and materialism in his existence. He meets a young woman, Glenn (Salli Sachse), who is interested in people who take LSD. Having learned from Groves recently that he would be taking LSD, she has been looking out for him. Glenn drives Groves to a beach house, where they have passionate intercourse. As the sun rises, Groves steps out to the balcony to get some air. Glenn asks him whether his first LSD experience was constructive. Groves defers his answer to "tomorrow." His face is frozen in close-up, and his image cracks like glass through an animation special effect. The Trip also features Dennis Hopper as Groves' dealer Max, who appears here with Fonda in a precursor role to Easy Rider (1969). Contrary to their characters in Easy Rider, though--and for obvious reasons--Fonda's Paul Groves acts paranoid and anxious in The Trip, while Hopper's Max appears calm and collected. The LP has been autographed on the front cover by Dennis Hopper,Peter Fonda,Bruce Dern and Susan Strasberg....CONDITION OF VINYL,COVER AND AUTOGRAPHS IS VG............ 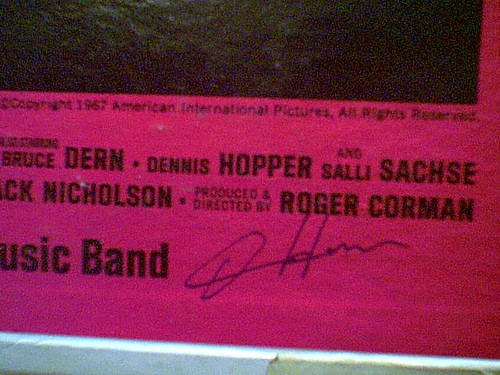