Rolling Stone Magazine-April 16, 1970-No. 56-54 pages. This vintage Rolling Stone Magazine/Newspaper-which originally sold for fifty cents-features a cover photo of actor Dennis Hopper. The Rolling Stone also features a 7 page article with photos on Dennis Hopper-"In Peru With Dennis Hopper Making The Last Movie".The image of actor Dennis Hopper as a wild and intense bad boy has softened in recent years, but he's still famous for his many roles in independent movies and for his work in a handful of cinema classics. He started in the movies in the early 1950s, appearing in Johnny Guitar (1953), Rebel Without A Cause (1955) and Giant (1956). In the '60s his reputation as a "difficult" actor who favored improvisation kept him from getting many mainstream roles, and he appeared in several low-budget movies, including the "hippie" cult favorites The Trip (1967) and Head (1968). He directed and starred in 1969's Easy Rider with Peter Fonda and Jack Nicholson, a box office success that steered Hollywood toward counter-culture marketing. During the 1970s Hopper was mostly known for being out of control and out of work, excepting a memorable role as a whacked-out journalist in Francis Ford Coppola's Apocalypse Now (1979, starring Martin Sheen). His career was revived in the late 1980s by crazed performances in David Lynch's Blue Velvet (1986) and the teen-angst drama River's Edge (1986), and by a surprisingly understated presence in Hoosiers (1986, starring Gene Hackman). He followed with a spurt of good parts in smaller films, including TV's Paris Trout (1991) and the feature films Nails (1992) and Boiling Point (1993, with Wesley Snipes). Since then his most memorable role has been as the villain in Speed (1994, starring Keanu Reeves), but he seems to pop up often enough in independent films and spots on TV, including as a ruthless villain in the first season of 24 (starring Kiefer Sutherland) and as a member of the U.S. Joint Chiefs of Staff in the 2005 series E-Ring (co-starring Benjamin Bratt).The Rolling Stone has been autographed on the front cover by Dennis Hopper.....BOTH ROLLING STONE AND AUTOGRAPH ARE IN VERY GOOD CONDITION........ 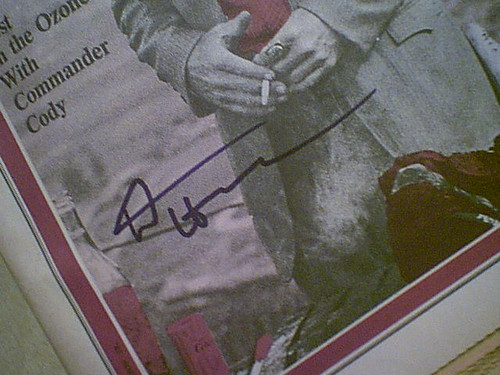