Life Magazine-May 11, 1962-134 pages. This vintage Life Magazine-which originally sold for twenty cents-features a color cover photo of Bob Hope plus an article with photos.Hope, Bob, 19032003, American comedian, b. London as Leslie Townes Hope; he came to the United States at the age of five. Famous for his ski-jump nose, topical humor, superb timing, brashly irreverant attitude, and rapid-fire delivery, Hope enjoyed immense popularity. He began his show-business career as a vaudeville dancer and later appeared in plays and film, on radio and television, and in concert. In addition, he hosted the Academy Awards ceremonies a record-breaking 17 times over 38 years. Hope made more than 50 films, including seven Road pictures, a comic series that began with Road to Singapore (1940), which introduced his long partnership with crooner Bing Crosby and actress Dorothy Lamour, included Road to Morocco (1942), and ended with Road to Hong Kong (1962). Among Hope's other movies are Monsieur Beaucaire (1946), The Paleface (1947), The Seven Little Foys (1955), and How to Commit Marriage (1969). He also wrote books on various topics, including his overseas travels and his love of golf. After 1972 he left movies but continued as the host of numerous television variety specials. A master of the monologue and the mildly salacious one-liner, he was an indefatigable entertainer of U.S. troops overseas from the 1940s into the 1990s.The Life Magazine has been autographed on the front cover by Bob Hope...........BOTH MAGAZINE AND AUTOGRAPH ARE IN VERY GOOD CONDITION................ 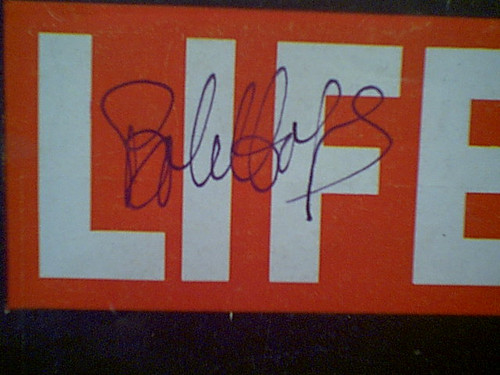