"Personality"-1945-Burke & Van Heusen-sheet music. This song is featured in the 1946 Movie-"The Road To Utopia". The movie stars Bob Hope,Bing Crosby and Dorothy Lamour and they are featured on the front cover of the sheet music in an original scene.The first "Road" picture in three years (the last was The Road to Morocco), Road to Utopia is set during the Alaskan gold rush. Bob Hope and Bing Crosby play a pair of third-rate San Francisco entertainers, Chester Hooton and Duke Johnson, who are obliged to skip town in a hurry. They book passage on a ship to Alaska, where they run afoul of escaped murderers Sperry (Robert H. Barrat) and McGurk (Nestor Paiva). Through a fluke, Chester and Duke overpower the killers, then get off the ship in Skagway disguised as Sperry and McGurk so that they themselves can evade the authorities. The boys can't understand why everyone is so afraid of them, nor why saloon owner Ace Larson (Douglas Dumbrille) and Larson's moll Kate (Hillary Brooke) are so chummy. It turns out that Sperry and McGurk had stolen a deed to a valuable gold mine before escaping to Alaska. Sal Van Hoyden (Dorothy Lamour) is the rightful owner of that deed, thus she too shows up in Skagway, hoping to extract the document from Chester and Duke. Whenever the plot threatens to become too difficult to follow, narrator Robert Benchley shows up to explain things  which of course only adds to the confusion. At any rate, the whole affair ends up with Chester, Duke, and Sal running through the snowy wastes, with the villains in hot pursuit. Duke nobly stays behind to fight off the bad guys himself, handing the deed to Chester and Sal and wishing them Godspeed. Flash-forward to 1945: Chester and Sal, both old and wealthy, are reunited with their equally aged pal Duke, who wasn't killed after all. Sal tells Duke that Chester has been a wonderful husband and father. Yes, father...and wait till you see who plays their child ("We adopted him!"). Road to Utopia is the usual melange of ad-libbed chatter, snappy songs, talking animals, and "patty cake, patty cake." You'll love it. The sheet music has been autographed on the front by Bob Hope with a fountain pen in blue,Dorothy Lamour with a fountain pen in black and Bing Crosby with a fountain pen in black................BOTH SHEET MUSIC AND AUTOGRAPHS ARE IN VERY GOOD CONDITION................. 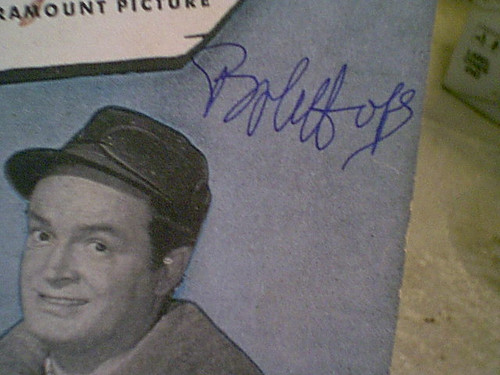