This item is an 8" X 10" black and white caricature of Bob Hope. The photo is from 1976 and comes with an original dated byline. The byline is on original NBC stationery and explains that Bob Hope will be hosting an Olympic Benefit Show from Montreal and gives the date of broadcast.Bob Hope was a triple-threat superstar of radio, film and television during the 1940s and 1950s. Primarily a comedian, Hope also acted, sang and danced a little, hosted his own radio and television shows, and carried on a famous comic feud with his friend and fellow star, crooner Bing Crosby. Hope spent much of World War II traveling the world to entertain Allied troops, a service he also performed with gusto during later wars in Korea, Vietnam, and the Middle East; his entertain-the-troops tours became one of his enduring signatures. Though his superstar years ended in the 1960s, Hope continued to make appearances well into the 1990s. In May of 2003 he celebrated his 100th birthday with a typical wisecrack: "I'm so old they've canceled my blood type." He died a few months later, in July 2003.Hope never won an Oscar for a film performance, but received five honorary Academy Awards for his contributions to the motion picture industry... He was a frequent host of the annual Academy Award ceremonies... Hope's love of golf was famous, and his annual golf tournament, the Bob Hope Desert Classic, became a regular stop on the PGA Tour... Hope was born in England but was raised in Cleveland, Ohio after his family moved there when Hope was four years old... Hope married Dolores Reade in 1934, and they remained married until his death in 2003; the couple adopted four children: Linda, Anthony, Honora (called Nora), and William Kelly... "Thanks For the Memory" was Hope's theme song; the tune came from his first feature film, The Big Broadcast of 1938. The photo has been autographed on the front by Bob Hope.......................CONDITION OF PHOTO,BYLINE AND AUTOGRAPH ARE IN VERY GOOD CONDITION........ 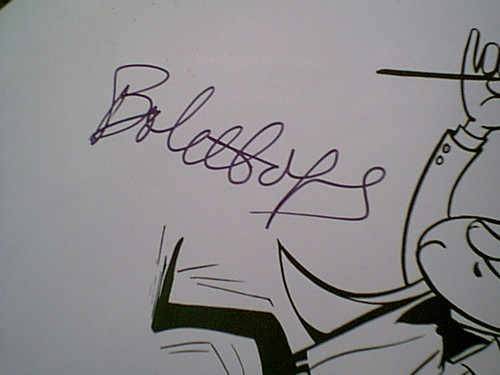